On February 1, 2021, the AAUW Corpus Christi Branch celebrated the 100th birthday of Audrey Jones – a 50-year member of AAUW – with a drive-by parade that included cars decorated with balloons, signs and American flags. More than 30 vehicles lined up for the procession. Audrey is a World War II veteran and a member of the “Greatest Generation.” After graduating from Milwaukee-Downer College in 1941 with a degree in Foods & Nutrition and Chemistry, Audrey was working at a hospital internship in Colorado when Pearl Harbor was attacked on December 7, 1941. She says she remembers that day clearly, sitting by the radio and listening to the event unfold. When she heard that the U.S. Army needed dietitians, Audrey made the decision to enlist in the service as a hospital dietitian. 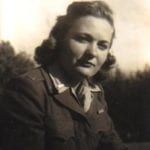 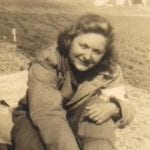 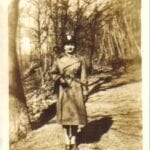 In 1944, Audrey was stationed in southern England as our troops prepared for the D-Day invasion. Soon after D-Day, she and her unit followed our troops across the English Channel, landing at Utah Beach, and continued on with the troops through France, Luxembourg, and Germany. She worked in a mobile tent hospital close to the front lines, attached to General Patton’s Third Army. Audrey was at the Battle of the Bulge, and she says, “I remember that; that was a Christmas celebration.” After the war, Audrey and her husband, Frank, eventually moved to Corpus Christi, Texas, where they raised three sons and where she earned a teaching certificate at Texas A&M University – Corpus Christi.

The AAUW Corpus Christi Branch contacted state and local officials about Audrey’s 100th birthday and about her extraordinary service to our nation and to AAUW. In response, Texas District 32 State Representative Todd Hunter honored the 100-year-old female veteran with a State of Texas Resolution and an American flag that flew over the State Capitol on her birthday. In addition, Mayor Paulette M. Guajardo signed a City of Corpus Christi Proclamation declaring this “Audrey Jones 100th Birthday Celebration Day.” Further, the Nueces County Veterans Services Department presented a framed Certificate of Recognition, along with a red rose encased in a glass globe. Due to COVID restrictions, the documents were given to her son Paul who presented them to Audrey at a party held inside the Viera. Afterward, Audrey and her family members sat outside to watch the parade of AAUW members, other friends, and fellow veterans deliver birthday greetings and well-wishes from their vehicles. Seated are Audrey Jones and her son Paul Jones. Photo by KRIS 6 News

Audrey is an unassuming person. For the day’s parade and other honors bestowed on her, she stated, “It’s been a humbling experience. It’s heartwarming. I feel inadequate, as if I don’t deserve it, but I’m glad I have it. Thank you everybody.”

Our message to you, Audrey, is that we are glad to have YOU! Thank you so much for all you have done for our community, our nation, and our AAUW organization.

We are thankful to the local media that covered the event, and the story has caught nationwide attention. Here are several links to view: