In 2012, the AAUW Corpus Christi Branch established the Sue Stanford Scholarship in recognition of Sue’s outstanding commitment and long-term dedication to our Branch and to the mission of AAUW.  Sue Stanford was the founder of the Branch’s Book Finders group, which she chaired for many years.  Through the tireless efforts of the Book Finders, the Branch has raised funds annually for scholarships and other community outreach projects.  Each year, the Branch selects a Texas A&M University – Corpus Christi student to receive the $1,500 Sue Stanford Scholarship. 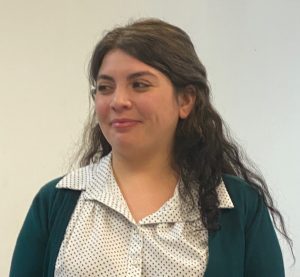 The 2022 Sue Stanford Scholarship recipient, Laura Lamb, is from the Rio Grande Valley and has a bachelor’s degree in Anthropology and Spanish.  During her undergraduate years, she spent time in a Mayan Village in the Yucatan where she conducted ethnographic field work.  She later started teaching as a member of the Teach for America Corps.  Laura moved to Corpus Christi and is working on her master’s degree at Texas A&M University – Corpus Christi, concentrating on the history of the colonias in South Texas.

Kristin Conlan, co-chair of the Book Finders committee, presented Laura Lamb with the scholarship and an award certificate.  Laura’s parents, Bertha and Rudy Rodriguez, also attended the presentation.  Kristin explained that our Branch raises funds through book sales coordinated by the Book Finders committee so that we are able to provided scholarships each year.  Laura thanked the membership for honoring her with this award, and she mentioned that she enjoyed our guest speaker’s presentation because the topic of building and restoring a sense of community to distressed neighborhoods was tied closely to her research.  Sometimes events merge together serendipitously! 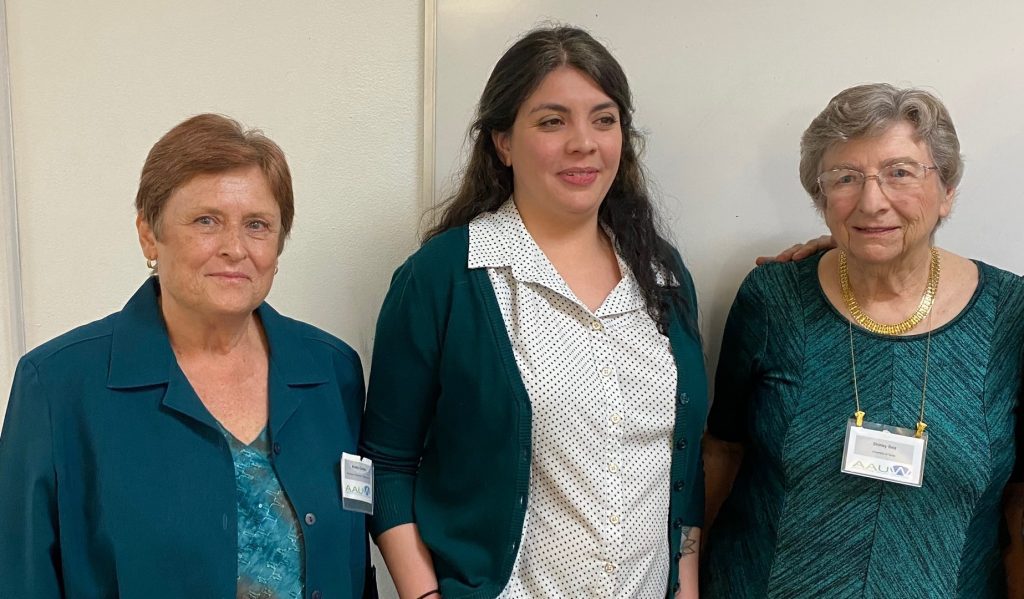 The 2021 Sue Stanford Scholarship recipient, Krista Russell-Adams, is an Oregon-born, Southern California-raised transplant to South Texas.  She has earned two Bachelors of Arts degrees: one in English with an emphasis in Creative Writing and the other in History.  She is currently in her second year of graduate studies in History at Texas A&M University – Corpus Christi.

When Krista is not diving into the annals of history, she is a mom to two teen girls and a wife to a Marine Corps veteran.  She is also a genealogist and a graphic designer, in addition to helping her husband run three businesses.  Krista also homeschools her two girls.

Dr. Peter Moore, Professor of History at Texas A&M University – Corpus Christi, introduced Krista Russell-Adams to the Branch membership at our Zoom meeting held on February 6, 2021.  When asked about her latest educational pursuits, Krista professed a “love of learning” and talked about how history became her passion at a young age when she started working on genealogy with her grandmother.  President Shirley Selz told Krista that the Branch was pleased to offer her the scholarship and said that the Branch would look forward to a report, written or in-person, from Krista next year to tell us about her progress in her studies.

The 2020 Sue Stanford Scholarship recipient, Nicole Boudreau, is a graduate student working toward her master’s degree in history at Texas A&M University – Corpus Christi.  Nicole, born and raised in Corpus Christi, graduated with a B.A. in history from TAMUCC in 2009, and she is the first college graduate in her family.

Nicole has been a high school teacher for seven years, and she is currently working at Foy H. Moody High School where she teaches U.S. History courses, including the dual enrollment U.S. History course offered through the University of Texas OnRamps program.  While working full-time and raising a family, she has completed two years of graduate school at TAMUCC and is beginning work on her M.A. thesis, which is focused on a cultural history of LGBTQ communities in late 20th century in South Texas. The 2019 Sue Stanford Scholarship recipient is Shelby Gonzalez, a graduate student working toward a master’s degree at Texas A&M University.  Shelby is writing her thesis on the role of African-American soldiers in securing self-emancipation during the Civil War.  After graduation, she plans to pursue a degree in library science, with a focus in archival studies.  Dottie Ewing, AAUW Branch President, presented Shelby with the $1,500 scholarship at the February 2019 meeting.  Shelby expressed her gratitude to the AAUW Branch and described how meaningful it was to receive the assistance.  Shelby also stated that she plans to “pay it forward” in the future by helping other students achieve their goals, just as AAUW has helped her. The 2018 recipient of the Sue Stanford scholarship is Lauren Robinson.  Lauren is a graduate student working toward a master’s degree in history at Texas A&M University – Corpus Christi.  Her long-term goals include securing another degree in library science, with a focus on archival studies.  Lauren was presented with the scholarship at the February 3, 2018, Branch meeting. The 2017 recipient of the Sue Stanford Scholarship was Tara D. Ivey, a graduate student in history at Texas A&M University – Corpus Christi.  Tara Ivey was born in rural South Texas and grew up surrounded by people who inspired her love of Texas history.  Tara was the first in her family to earn a bachelor’s degree, graduating in May, 2014, from Texas A&M University – Corpus Christi with a degree in History, and she entered the History Graduate Program the following Fall.  Through her research into the life of Corpus Christi founder Henry Lawrence Kinney, the subject of her master’s thesis, she seeks to gain a better understanding of the political and economic origins of American expansion and imperialism in the nineteenth century.  Tara has earned several scholarships that have helped support her extensive research into the life of Henry Lawrence Kinney, which she hopes to publish one day.  Tara was the speaker at the Branch’s February 3, 2018, meeting, presenting a lively depiction of Henry Lawrence Kinney and his movements across the United States. In 2016, the Branch awarded the Sue Stanford Scholarship to Crystal Ballard, a graduate student in the history program at Texas A&M University – Corpus Christi.  Crystal made a presentation at the February 4, 2017, Branch meeting on her research topic, Scenes of Dixie, a story examining the lives of three confederate women writers who lived on the home front during the Civil War.  As a scholar, Crystal expressed her interest in understanding how the evolution of southern female identity advanced during and after the Civil War.