The AAUW Corpus Christi Branch held a meeting electronically on May 1, 2021. 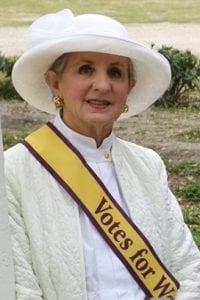 In attendance were 23 members.  After welcoming guests and members, several end-of-the-year reports were made.  Program Vice President Sylvia Rendon introduced our speaker, Sylvia Whitworth, who has been an AAUW Branch member since 2019.  Sylvia is a seasoned world traveler who has visited over 100 countries.  Sylvia grew up in Corpus Christi, and she inherited the travel bug from her mother, Florence Beatty, who was president of the AAUW Corpus Christi Branch in 1973 to 1975.

Sylvia Whitworth enchanted us with personalized stories of her trips to 10 exotic, fascinating places around the world.  She shared pictures of “refrigerator magnets” she has collected from her travels that serve as mementos and a visual reminder of these trips.  The 10 locations Sylvia shared stories about were:

Sylvia’s unique travel stories were breathtaking and awe-inspiring.  We hope that they are also inspirational, and that we will have more travel stories from additional members to share in the future, once it is safe for world travel again!